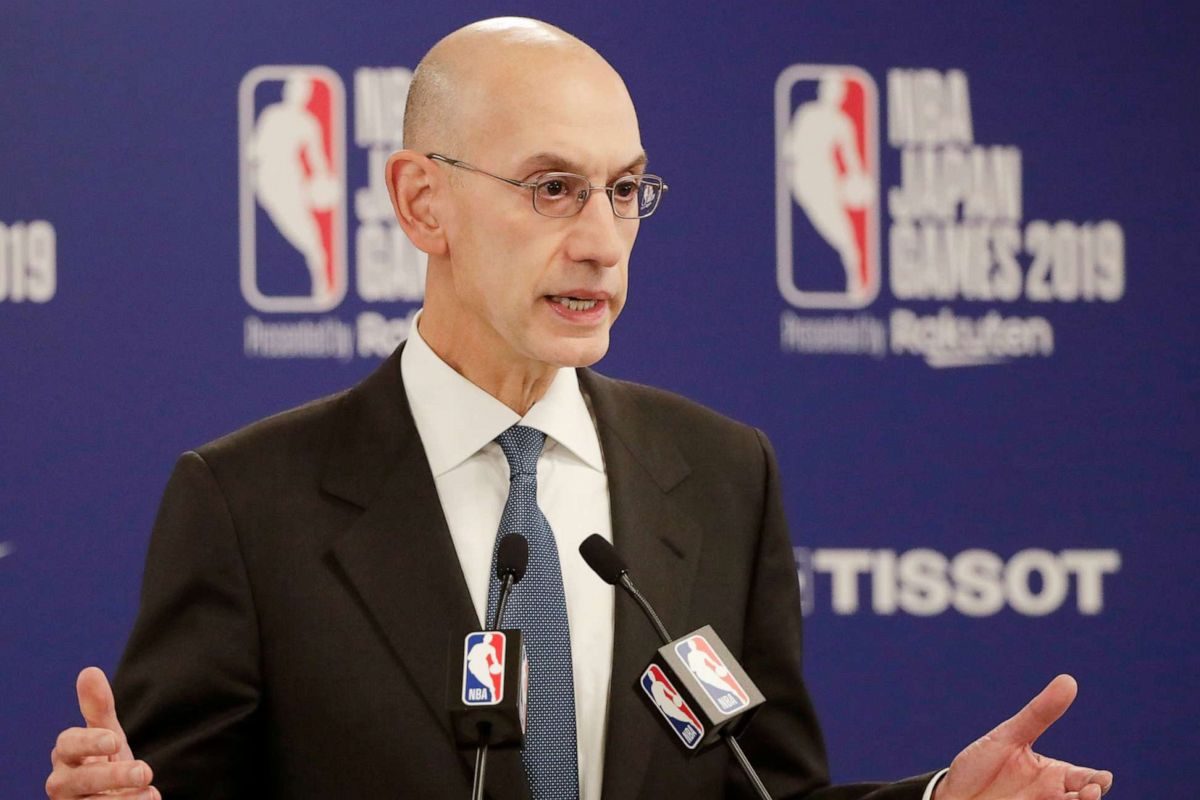 Following an unprecedented year where professional sporting competitions were shut down and re-opened in front of no crowds, the NBA recently released its playing schedule for the 2020-2021 season. Changes to the 2020-2021 NBA schedule include:

The Covid-19 pandemic resulted in a long run into play-offs and finals games. A season that includes 82 games, which most experts consider “gruelling” became more challenging. To make matters worse, players (and staff) were required to relocate away from their families for (up to) several months in order to resume the season. The NBA Finals series usually concludes in June, however the 2019-2020 season lasted until mid-October!

How Could the December Start Date Affect the Conference Finalists?

Although the rest provided to the Conference finalists is less than other seasons, teams can still turn this into a positive. While a large proportion of players use the off-season to improve, some players do not prepare as well during off-season and return to training camp in poor physical shape. The reduced off-season break may allow the Conference finalists to maintain a higher chronic training load, which in turn may facilitate better performances and lower injury risk in the start of the season.1,2

On the other hand, let’s consider the case of teams who (1) were in the bubble but didn’t make the Play-offs or (2) did not enter the NBA bubble. By the time the 2020-2021 season starts, these teams will have had 129 to 286 days rest since their last game! In the example of Kevin Durant, who missed the entire 2019-2020 NBA season with a ruptured Achilles tendon, he hasn’t played for 18 months. Clearly, there is a wide range of players with different levels of conditioning. Some players may enter the new season with high chronic loads (and potentially better capacities) but mentally “stressed”, while others may enter the season mentally refreshed but with low chronic loads (and potentially lower capacities). 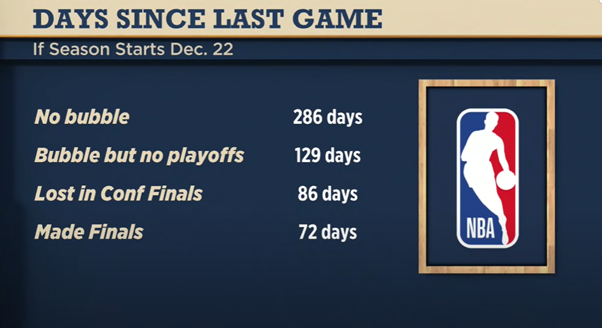 What Has the NBA Done to Minimize the Negative Effects on Players?

It appears that the NBA has worked closely with the NBA Players Association to ensure the health of players is at the forefront of any scheduling decisions. Although players have reduced off-season recovery time, they are required to play 12% fewer regular season games. The NBA is also contemplating organizing the schedule such that teams would have less travel, with back-to-back games in the same cities against the same opponent. In addition, although the traditional All Star break remains, no All Star game will be played, meaning that the best players who regularly play the most minutes and Finals series (e.g. LeBron James) will have some additional mid-season rest.

What Can Front Office Staff, Coaches, Sports Medicine and Performance Staff Do to Keep Players Healthy and Competing at a High Level?

The psychological stress associated with the Covid-19 Pandemic is real! Teams should not underestimate the impact that relocation away from families had on the mental health of players. And some players will handle it better than others! Although it is reasonable to assume that the training stress provided to players will have the greatest impact on adaptation, psychological stress can also influence both adaptation and injury risk,3 independent of training load. The teams that are aware of these challenges and have strategies in place to reduce mental stress will be best placed to deal with the challenges of the new season.

For players who have had a long rest since playing their last game, they should begin their preseason before the official training camp begins. By “buying” time in the off-season, it allows players a gradual and progressive increase towards the workloads required during training camp and the competitive season. Importantly, this graded approach has been shown to decrease injury risk and enhance readiness to perform.2 Micro-dosing (small regular bouts of training) may be a more suitable approach for players who have played deep into the 2019-2020 Finals series. Paradoxically, for these players, the high chronic loads developed through the extended season may result in better performance and decreased injury risk in the 2020-2021 season.2

The coming season will require individual player management more than ever before. The performance and medical staff who have a plan to deal with the individual stressors players face, and work together to achieve their performance goals will be best placed to navigate the challenges of the forthcoming season. Flexibility in their approach to player management and the ability to adapt to changing circumstances is going to be one of the extra skills NBA organizations will require next season!

Culture: The Most Used and Abused Word in High Performance Organizations